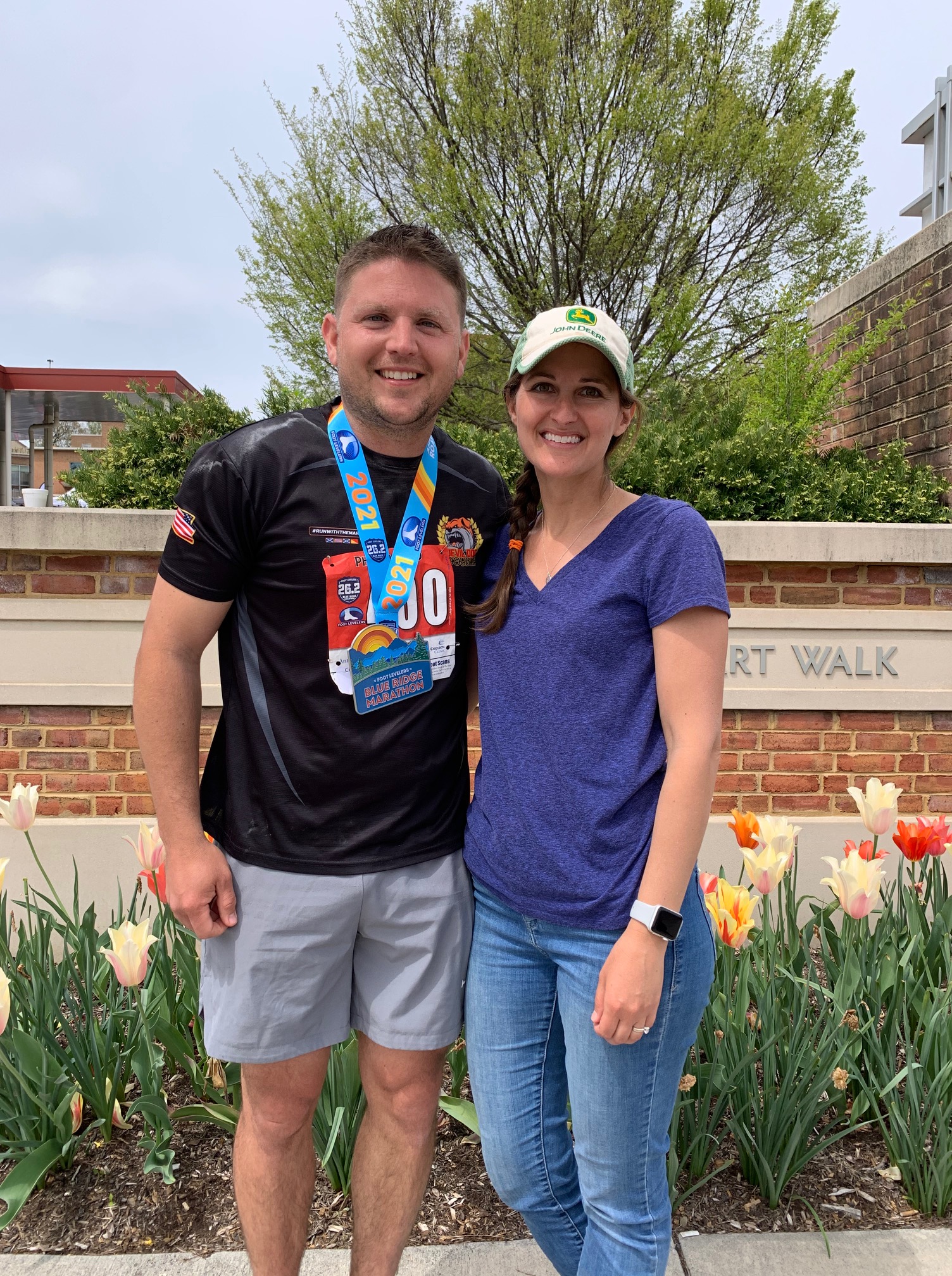 By MeredithApril 21, 2021August 2nd, 2022Faith, Marriage and Family, Purpose and Calling
No Comments

In 2019, my husband told me that one of his goals in life was to run a marathon. Through happenstance, he was able to get a slot in the Marine Corps Marathon in October of that year. It was an incredible day of fun (at least for me!) as I pushed our one year old son around D.C. with a new group of friends who I had met that morning, trying to make it to certain points along the way to cheer Phillip on. As I watched him run past me at mile 24, I knew that he was hooked. This wasn’t going to be a one and done kind of goal. This was going to be an ongoing thing, so it didn’t surprise me that I watched him complete his 4th marathon this past weekend.

The morning of the race, I walked into the hotel lobby and saw runners standing around, preparing to head to the race start. As I stood there, filling my coffee cup, I recognized that every runner had their person with them. There was someone with them who was designated to be the cheerleader. Some were spouses, some friends, some parents. No matter the title, on race day, your role is Support.

As I made my way through the city, hitting miles 14, 20 and 25, I started talking with the people around me (not surprising for those who know me!). Wives, husbands, kids faithfully watching and cheering for their runner. For some, it was their first rodeo, for others, it was their 10th. The number may be different but the sentiment was the same, they were there to support their person.

The race ended and I saw the support person hugging, high fiving and congratulating their runner. I couldn’t help but think about the Israelites and their battle against the Amalekites in Exodus 17:8-15.

Have you ever tried holding your hands up for a long time? I did while writing this! 1 minute in and I had the urge to put them down. 2 minutes, my shoulders started talking to me. 3 minutes and my fingers started to tingle. 4 minutes, my shoulders were burning. 5 minutes, I couldn’t stand it any longer and I had to put them down. Can you imagine what Moses was feeling?! And he was holding a staff, too!

But God didn’t send Moses to the hill alone. He sent Aaron and Hur with him. Scripture tells us that when Moses grew tired, they found him a rock to sit on and then Aaron came to one side, Hur to the other and they held up Moses’ hands for him. This wasn’t just a quick 5 minute, 10 minute or 30 minute ordeal, this was all day. Until sunset! The only way the Israelites could win the battle was if Moses held up his hands, but the only way Moses could hold up his hands was if he had someone holding them for him. He needed support. He couldn’t do it on his own. Instead, he had to share the load with his support, Aaron and Hur.

I love this picture of friendship. God designed us to be in relationship with others. He didn’t design us to keep our fears, our troubles, our pain in the dark. He wants us to bring them into the light so that others can come alongside you, hold up your hands and help you win the battle. In turn, you will be the one who one day holds up the hands of another and helps them get through.

This is also a picture of the church. Remember, God designed us for relationship. He designed his church to come alongside each other and cheer one another on. He wants us to spur each other on, to sharpen one another and to love each other, as Christ first loved us. Yes, Moses was the one who had to hold his hands up, no one else could do the job that God had called him to do, but Moses couldn’t do his job without the support of Aaron and Hur.

We have a great privilege as the body of believers. We may not all be called to the spotlight of leading a church or teaching a small group or running a ministry, but we are all called to be a support to those around us who are in that position. We may not have the leading role or be the one who is running the race, but we can cheer that person on. We can encourage them when the race seems too hard. We can be behind the scenes making sure things go smoothly. We can be the one who comes alongside that person, holds up their hands and offers support.

Another thought, not only did Aaron and Hur have to be willing supporters but Moses also had to be willing to receive help. Moses could have gone up on the hill and thought, “I’ve got this.” Instead, he humbly accepted the help that was offered from his friends.

Who is on your support team? Have you thanked them recently?

Who are you supporting? Are you being an encourager to them?

Whatever your role is, support or runner, we can all cheer each other on toward the goal of reflecting Christ’s love for us to those around us.

“I press on to reach the end of the race and receive the heavenly prize for which God, through Christ Jesus, is calling us.” Philippians 3:14

God, may we be supporters and runners for your glory.