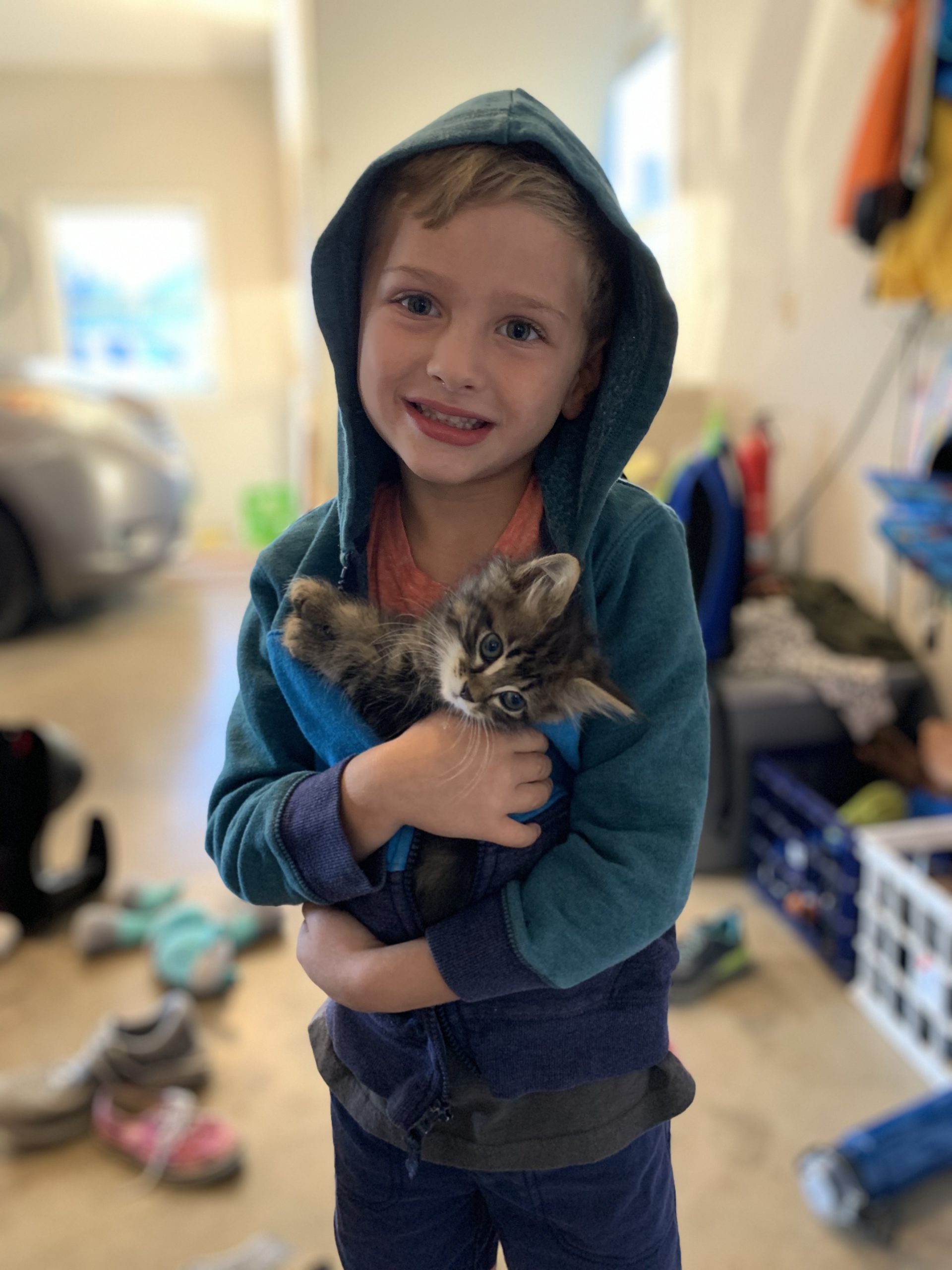 Curiosity Did NOT Kill the Cat

We have a new kitten, Millie Jane. She is precious and sweet and full of cuddles. The kids had been asking us for a long time for a cat and we finally caved!

I don’t consider myself a cat person, I definitely prefer dogs and I’ve always been hesitant around cats. They seem so unpredictable. One reason is that I grew up with a cat that I had convinced my parents to get for me, Lace, and she was an absolute nightmare. She not only hated all humans, but she would go out of her way to bite you or scratch you. Even in her old age, I could pet her for about 3 seconds before I would get bit and hissed at. She was so terrible that my sister gave me a picture of her with the frame inscribed, “Devil Cat.” She may not have been the Devil, but she certainly was one of his agents! But Millie came into our lives as a snuggly, happy kitten so my heart has softened a bit.

I was watching Millie play the other day and saw her stick her little head out under the porch railing and sniff at the flowers. A bee buzzed close. I expected her to cower in fear, like I do when a bee comes, but instead she reached her neck out further to sniff the bee. The phrase “curiosity killed the cat” came into mind, but as I watched her sniff out a potential danger, I began to marvel at her bravery. Now, I know that she is a kitten and probably doesn’t know that a bee might sting her if she starts swatting at it, but still I watched and learned from an 8 week old kitten.

While watching Millie allow her curiosity to direct her actions, I thought about something new that I think God is causing me to be curious about – starting a podcast or possibly a vlog. Sidenote – I would definitely love your thoughts on it, so feel free to write it in the comments or message me! A podcast or a vlog is scary, it feels risky and there is potential danger in it. People may not like what I have to say. I’m opening myself up to criticism. Maybe no one will listen.

And the hardest – I may fail.

But just because there is potential risk in it, doesn’t mean that I shouldn’t be curious about it.

And just because I might fail, doesn’t mean that I shouldn’t do it.

Millie wasn’t afraid to be curious. She sniffed, she hovered close, she even swatted at the bee. Millie opened herself up to danger, but in the end, nothing bad happened and she got to go on playing.

In John 12, we read that people came to see Jesus because they were curious about Him and about Lazarus, the man that Jesus had raised from the dead. Their curiosity that day led them to action. They had to go see Jesus. And because they were curious, many of them believed. Their healthy curiosity changed the whole trajectory of their lives. Curiosity led them to belief in Christ.

There was risk involved in the people going to see Jesus. Leaders during that time didn’t like that Jesus was becoming someone that people were listening to and following. But the people’s curiosity, aimed in the right direction, led them to eternal life through Christ.

If you are curious about something, chances are that there is some sort of risk involved. It’s ok to sniff it out, look more into it and ask questions. Just make sure that your curiosity is aimed in the right direction, toward an ever-growing relationship with Christ.

One final thought about curiosity – Daniel Boone once said, “Curiosity is natural to the soul of man,”  and he is right! God created us with a natural instinct to be curious about the world around us, but I also think that God created us with a natural curiosity so that we would be curious about Him. If we want our relationship with Christ to be ever-growing, then we must be curious about Him. Just like maintaining curiosity towards your spouse in a marriage keeps you pursuing them and wanting to know them better, maintaining curiosity of our creator keeps us pursuing Him and wanting to know Him better.

Lord, cause us to be curious of you and may that be the catalyst to a deep love and affection of your son, Jesus.